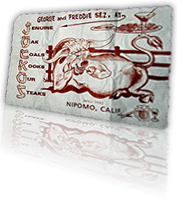 In 1886, Emery Knotts owned a saloon on Tefft Street in Nipomo. In 1838 a fire burned an entire block in the area of the saloon. The building was relocated to the west side of Thompson Street in the block just south of the present Jocko’s restaurant.

Emery had eight sons who helped run the saloon or “tended bar” over the years. One of Emery’s sons was Ralph “Jocko” Knotts. Jocko was the second licensed driver in Nipomo, he was also “Justice of the Peace.” In 1909, Jocko married Mollie Dallesi. Mollie was the first telephone operator in Nipomo and also a post mistress. Together they raised seven children, George, Patrick William (“Pookey”), Adela (“Sissy”), Marie (“Nunie”), Fred, James (“Beagle”), and Richard.

During the time of prohibition, (1920-1930) Jocko ran a garage and service station in Nipomo. It is rumored that even then, Jocko sold booze, white lightnin’ and home-made brew out of the trunk of a car.

Sometime during 1925, Jocko and “Bull’’ Tognazani (who owned Bull’s bar and restaurant in San Luis Obispo) opened a saloon/watering hole at one end of the garage called “Jocko’s Cage.” During the “flapper forties,” there were slot machines placed periodically in the bar. For about a month, there was a card room for poker playing. Jocko ran the bar vary successfully until he died a 1952.

Jocko’s son Fred, ran “Jocko’s Cage” until about 1956. He and his older brother George, who had assumed operation of Grandfather Emery’s saloon at the end of World War II, joined together and opened a restaurant and bar. They started out serving barbeque on Saturdays and Sundays and provided horseshoe pits under the pepper trees for entertainment. This proved very successful, Together, they combined their resources at this location. George gave up the saloon operation across Thompson in 1957. Adjacent to “Jocko’s Cage,” on Thompson Street was an old renovated street car in which the Arrellanes family maintained a lunch counter, serving tamales and other delicious Mexican dishes. Eventually, Fred and George took it over to use for additional seating, since their barbeques had substantially increased their business.

During the late 1950’s, this restaurant and bar was one of the most popular dining spots in the county. Jocko’s became well known to visitors who considered it the highlight of their visit to dine there and it continues to be so today. It is not unheard of for people to travel hundreds of miles to get to Jocko’s for the quote: (“best steak dinner I’ve ever had”).

In order to satisfy popular demand, George and Fred opened a new barbeque restaurant and saloon in 1962 across the street on the corner of Tefft and Thompson streets in a newly constructed building. They “branded” the walls of their new building with cattle brands of former Nipomo ranches as well as those of current owners. Included is the brand of Captain William C. Dana, original owner of the 38,000 acre Nipomo rancho grant to whose family the Knotts bear a relationship.

An original drawing, drawn by the well known artist, Al Ash, of the cow, deer and baby Jocko the “born hunter” still hangs prominently in Jocko’s bar. It is also believed that Al Ash gave Jocko his well known name, which means “monkey”, which he founded during a trip to the Flieshaker Zoo in San Francisco. For years, there were monkeys in Jocko’s bar.

Jocko’s restaurant, first conceived, and operated by his sons, George and Fred, is now operated by the late Fred’s wife, Sandy and their son Mike, they carry on the tradition and the name that has brought a modern-day fame to Nipomo.

So, as is currently printed outside Jocko’s Restaurant –

Your cart is empty.